04) What is lingering object how it occurs in replication?

LDAP stands for Lightweight Directory Access Protocol. It is an application protocol used over an IP network to manage and access the distributed directory information service. The primary purpose of a directory service is to provide a systematic set of records, usually organized in a hierarchical structure.

A description of the object classes and attributes stored in Active Directory is called schema.

08) What is the update sequence number (USN)?

An update sequence number (USN) is a 64-bit number in Active Directory that increases as changes occur. Local counters on every domain controller assign USNs. Whenever an object is changed, its USN is incremented. When replication occurs, only the version of the object with the greatest USN is retained.

Local counters for USNs are considered reliable because they never decrease or "run backward." USNs are also always unique, making it easier for domain controllers to never use the same USNS at the same time.

09) What is Knowledge Consistency Checker (KCC), and what is default interval time?

10) What is the ISTG? Who has that role by default?

By Default the first Server has this role. If that server can no longer perform

this role then the next server with the highest GUID takes over the role of ISTG. The domain controller holding this role may not necessarily also be a bridgehead server.

11) What is the Bridgehead server?

12) What is ADDS dependencies services? And AD Replication Topology Dependencies and model?

DNS - The DNS resolves DNS names to IP addresses. AD replication topology requires that DNS is properly designed and deployed so that domain controllers can correctly resolve the DNS names of replication partners. 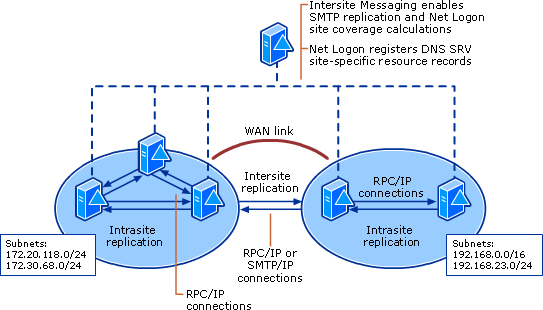